April 5, 2001 by weavesofthewheel No Comments 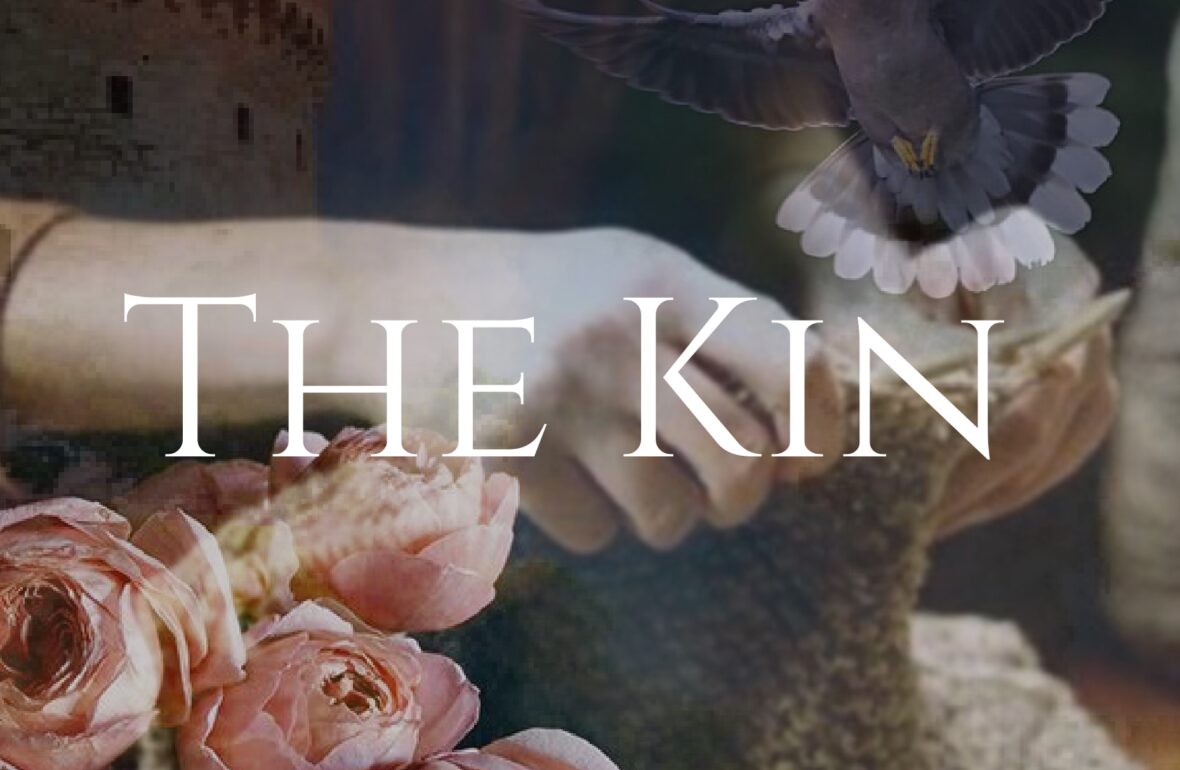 About: The Kin is a group of female channelers who help women who are put out of the White Tower and in some rare cases, runaways. The ruling body is called the Knitting Circle, and is headed by the Eldest.

The Kin is around two thousand years old. It was formed by a group sent away from the White Tower, that took refuge in the ancient city of Barashta (now the Rahad, the oldest district of Ebou Dar), during the troubling times of the Trolloc Wars. It began quite by accident; the founders originally stuck together for safety. The Aes Sedai discovered the organization quite quickly, but found the Kin to be quite convenient for taking in  channelers that failed to become Aes Sedai and redirecting runaways back to the Tower. As such, the White Tower decided to not intervene against it. During the centuries the Kin became the refuge for many hundreds of female channelers, finally gathering more channelers than the Tower itself. In fact its discretion, its ability to hide the Kinswomen by organizing a rapid turnover of people from the same place, left the Aes Sedai completely unaware of its real dimension.When encountered by Nynaeve and Elayne, there were 1,783 members.

This is the 1st Column. Prince Arthas Menethil was born by Lianne Menethil to King Terenas Menethil II, four years before the start of the First War and is their youngest child. The young prince grew up in a time when the lands of Azeroth were ravaged.

This is the 2nd Column. As a youth, Arthas was trained in combat by Muradin Bronzebeard, the brother of the dwarven king Magni Bronzebeard, and became an adept swordsman. Under the tutelage of Uther the Lightbringer, Arthas was inducted into the Knights of the Silver Hand at the young age of 19. The ceremony was held in the Cathedral of Light in Stormwind City, and it was then that Arthas was given the holy mace called Light’s Vengeance. Despite his rash and headstrong behavior, Arthas became a renowned warrior. One of his more famed exploits was counterattacking a group of forest trolls striking at Quel’Thalas from Zul’Aman.

It was during this time that Arthas met the youngest daughter of Daelin Proudmoore, the sorceress Jaina. Over the years, they grew close as friends, and then romantically. They were very much in love with one another. But, eventually Arthas would question whether the two of them were ready to be together. Arthas would abruptly end the relationship so Jaina could focus on her magical studies in Dalaran and Arthas could focus on his commitments to Lordaeron. Shortly after, they would agree to rekindle their romance, but this was during the beginning of the Scourge invasion that would change both of their lives forever.

This is the best restaurant I have ever visited. Great location and great food. The only minor downside are the prices which are pretty high but I guess quality comes with the price. - John Barbista
Troubles began to stir in Lordaeron. Orcs broke free of their internment camps, and there was distressing news of a plague that had gripped the northlands. Arthas and Uther were sent to Strahnbrad to defend the town from orcish raids. The young prince defeated the black drake Searinox to retrieve its heart for the dwarf Feranor Steeltoe to forge into an orb of fire. Arthas used this magical item to kill the Blackrock Clan’sblademaster leading the raids.

However, a more vile threat arose in the form of the plague of undeath. Jaina and Captain Falric were sent to join Arthas, now 23 years old, in order to investigate the strange plague. They fought an undead army at a plague-infested granary. They encountered the necromancerKel’Thuzad in the town of Brill and pursued him to Andorhal.

Kel’Thuzad had already infected the stored grain in Andorhal and shipped it out to outlying villages. Before Arthas killed him, Kel’Thuzad spoke of Mal’Ganis, a Nathrezim demon who led the Scourge. Jaina and Arthas traveled north to confront him in Stratholme.

Along the way, Arthas and Jaina stopped at Hearthglen Village where they hoped to rest. Instead, they were warned of an approaching army of undead. Arthas ordered Jaina to find Uther and seek his aid while he remained behind to defend the town. To his horror, Arthas discovered that the plague was not merely a means of mass murder, but rather, the means of turning innocent townsfolk into undead creatures. Arthas’ forces barely held out and were on the verge of defeat when Uther arrived with reinforcements and saved the village.

While traveling to Stratholme, Arthas was met by the enigmatic prophet Medivh. He gave him the same advice he gave Terenas — to travel west to Kalimdor. Arthas argued that his place was with his people, and vowed that he would not abandon them. Jaina suggested that the prophet might be right, but Arthas paid her no heed and continued to Stratholme.

When he arrived, Arthas found that the grain had already been distributed, and knew that the villagers would soon become undead zombies. He ordered Uther and his knights to purge the entire city. Horrified, Uther rebuked him by saying that he would not follow such an order even if Arthas were already king. Proclaiming that Uther had committed treason, Arthas disbanded the Knights of the Silver Hand. Several of his soldiers left with Uther — as did Jaina — while those that remained loyal to Arthas joined him in slaughtering the corrupted townsfolk.

As Arthas began to slay the citizens of Stratholme, he was met by Mal’Ganis himself, who was working to claim the souls of the townsfolk. Arthas worked to destroy them before Mal’Ganis could reach them. Finally, Arthas demanded a final showdown with the dreadlord. Mal’Ganis slipped away, however, vowing to meet him in Northrend. Arthas then set fire to Stratholme. Something snapped in Arthas that day, his inability to stop the plague sent him down the cold lonely road he would soon follow. The fires burn to this day.

Arthas followed Mal’Ganis with a detachment of his troops. They arrived a month later in Daggercap Bay. As they searched for a proper place to set up camp, Arthas’ men came under gunfire before being recognized by the dwarven explorers guild. Arthas was shocked to have come upon his good friend and former mentor, Muradin Bronzebeard. At first, Muradin thought that Arthas was leading a rescue party sent to save his men, who had been besieged by the undead as they searched for the runeblade Frostmourne. Arthas admitted it was mere coincidence. Together they destroyed the nearby undead camp, but there was still no sign of Mal’Ganis.

As Muradin and Arthas went to search for Frostmourne, an emissary from Lordaeron arrived in a zeppelin and spoke to Captain Luc Valonforth. He bore orders from Uther and Terenas, instructing Arthas and his men to return home. When Arthas returned to his base, the men had abandoned their posts, and were making their way through the forest towards their boats. Arthas had no intention of leaving before Mal’Ganis was destroyed. With the help of some indigenous mercenaries, he managed to reach and burn his boats before his men got to them. When his men arrived, Arthas betrayed his mercenaries, accusing them of destroying the ships, and the Captain had them killed, much to the disgust of Muradin. Arthas told his men that they had no means of going home, and the only way they were leaving Northrend was through victory.

Arthas and his troops continued to press on to Drak’Tharon Keep in search of Frostmourne. As he arrived, Mal’Ganisappeared to him, and foretold his death. Arthas went to search for Frostmourne with Muradin, leaving his captain to defend the camp.

Using an ancient waygate, Arthas, Muradin, and a small group of men traveled to the vicinity of the fabled runeblade. Arthas was soon confronted by the Guardian, who tried to keep him from Frostmourne, apparently for his own protection. The Guardian fell, and Arthas and Muradin went forward to their prize. Muradin, reading an inscription, reported that the blade was cursed and pleaded “Oh, leave it be, Arthas! Forget this business and lead your men home!”, but Arthas was adamant. Arthas asked the spirits of the cavern for the sword to be released from its icy prison, proclaiming that he would “give anything or pay any price, if only you will let me save my people.” When the weapon broke free, Muradin was struck by a rogue shard of ice. Arthas moved to help Muradin, but was dissuaded by the call of Frostmourne in his mind. Arthas discarded his holy warhammer, Light’s Vengeance, then picked Frostmourne up and returned to his base, leaving Muradin for dead. With Frostmourne in hand, Arthas defeated Mal’Ganis’ minions and finally confronted the demon.

Mal’Ganis told him that the voice he was now hearing was that of the Lich King. However, Arthas replied that voice was instructing him to destroy Mal’Ganis, much to the dreadlord’s surprise. Slaying the dreadlord, Arthas fled into the frozen north, leaving his troops to fend for themselves. Arthas soon lost the last remnants of sanity.