How to Play: Weapons Fights (Training and Heron/Dragon Mark Trials) 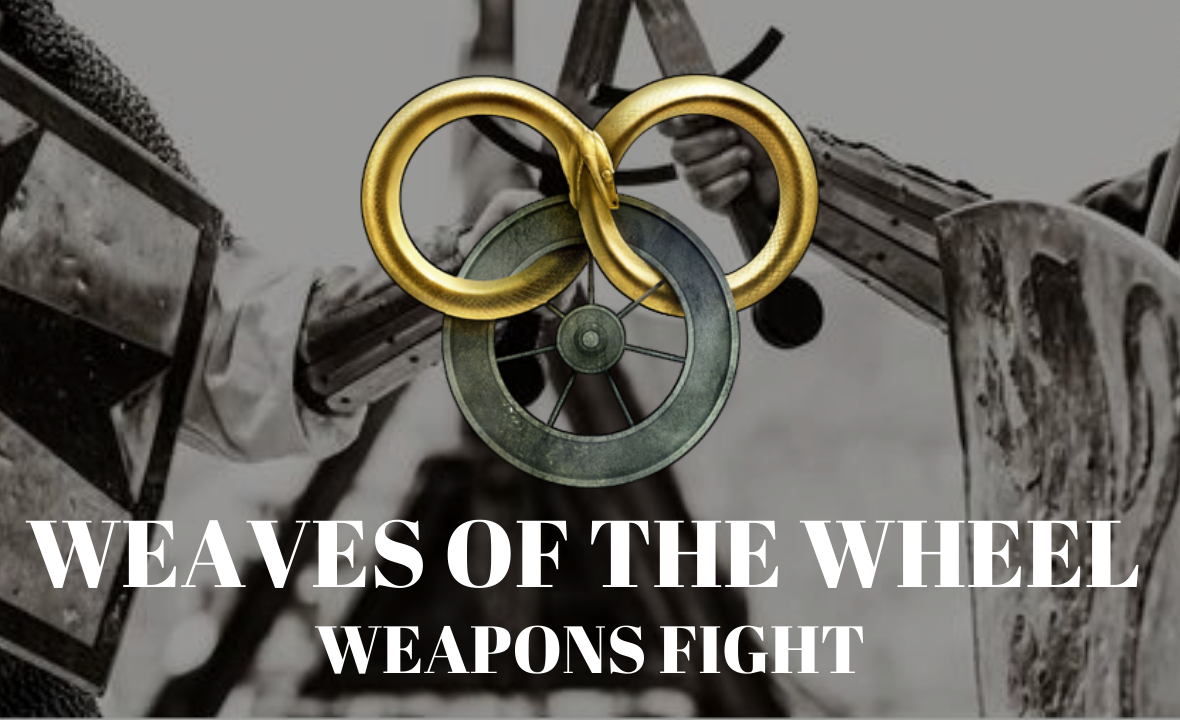 Created for The Weaves of the Wheel Community 4th Age RPG. Any player who has collected weapons points may go into battle. This game may also be used in training in the Warder Yard and for earning Heron/Dragon Marks.

Using the Weapons Points System created by Weaves of the Wheel, a minimum of 2 players will go head to head in a fight with their chosen weapon from their weapons board. The winner will be determined by the roll of a dice. There will be up to 5 rounds, depending on the weapons points of those fighting. The warrior who wins the most rounds is the winner. In the event of a tie break, the overall numbers collected per round are added together. The person with the higher number wins.

Fighters and observers may bet on the outcome of the fight using WotW Currency.

The player may choose to play any weapon from their board that has at least 10/50 points.

A 6 sided dice will be rolled by a gamesmaster (a neutral party) in rounds.

The highest dice roll wins that round. The gamesmaster should pause between rounds to allow the players to roleplay accordingly.

If one player has more dice rolls than their opponent (see game example) those dice should be rolled first to give the player with the highest weapons points a base number to build upon.

On occasion, the gamesmaster may determine which  weapons can be used in the fight and it is for the player to submit themselves to that game.

The fighters themselves may also bet on the outcome of the fight, and may fight for or against themselves. The gamesmaster may not bet on any outcome and MUST remain neutral.

These bets must be finalised before the first dice is rolled.

Observers may also bet among themselves before and during the fight. This is determined by the individual.

Fighters will receive coin for participation. The winner will win GM equivalent to the total weapons points of both opponents (in the example below, 80GM). The loser will earn GM equivalent to half of their own points for the weapon used in the fight.

The gamesmaster will earn 10% of the total pot taken in bets.

Player 1 has 5 rolls to achieve the highest number, and player 2 has 3. Player 1 will have an advantage, but is not guaranteed to win the game.

The minimum buy in to bet on this fight is 80GM. Bets must be taken before the roll of the first die. It is the responsibility of the gamesmaster to ensure bets are completed and to keep track of the bets placed. Bets between observers are kept track of individually.

Player 1 has an advantage of 2 additional roles. The gamesmaster will roll these dice first, and give player one a base number via screenshot or recording.

The game will then begin by rolling the first die for both players. The results should be shared with the group via screenshot or recording. The gamesmaster will then pause to allow for roleplay.

The gamesmaster will then announce when the next round is to begin.

The 3 rounds are completed and the winner is announced.

In the event of a tie. A final dice roll will determine who wins the game.

Once the winner is announced, the gamesmaster will determine the winners and split the coin accordingly. It is the responsibility of the individual members to keep track of their wins and losses and update their coins tally.