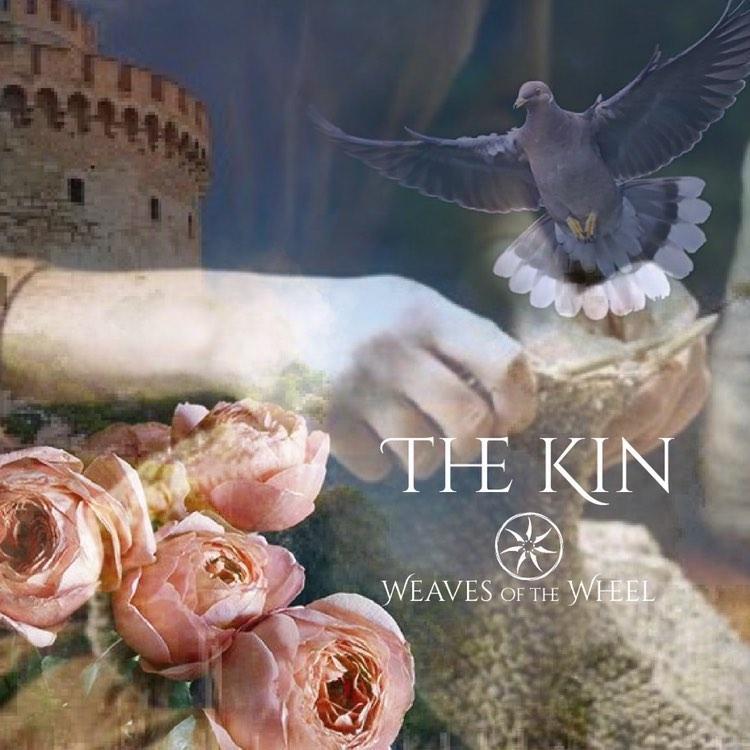 This page documents the histories of The Kin, with a focus on the Kin at the start of the 4th Age. This information is created by the Weaves of the Wheel Storytelling community, for the purpose creating new characters and stories within a new timeline. This information is a creative effort by all community members and serves to provide a richly detailed world within which we play that adheres to the canon created by Robert Jordan for the Wheel of Time series. This information is created for the purpose of fan enjoyment and is not affiliated with the Bandersnatch group. To find out more about Weaves of the Wheel Storytelling RPG, click here

The Kin is a group of female channelers who help women who are put out of the White Tower and in some rare cases, runaways. The ruling body is called the Knitting Circle and is headed by the Eldest.

The Kin is around two thousand years old. It was formed by a group sent away from the White Tower, that took refuge in the ancient city of Barashta (now the Rahad, the oldest district of Ebou Dar), during the troubling times of the Trolloc Wars. It began quite by accident; the founders originally stuck together for safety. The Aes Sedai discovered the organisation quite quickly, but found the Kin to be quite convenient for taking in  channelers that failed to become Aes Sedai and redirecting runaways back to the Tower. As such, the White Tower decided to not intervene against it. During the centuries the Kin became the refuge for many hundreds of female channelers, finally gathering more channelers than the Tower itself. In fact its discretion, its ability to hide the Kinswomen by organising a rapid turnover of people from the same place, left the Aes Sedai completely unaware of its real dimension.

When encountered by Nynaeve and Elayne there were 1,783 members.

THE RULES OF THE KIN (pre- Last Battle)

The Kin adhere to strict rules as an organisation, for the safety and well being of all its members. What kept the Eldest from changing the rules was the simple fact that it was forbidden to change the Rule.

1) All Kinswomen, even the Eldest, are subject to the Rule.

2) All Kinswomen obey any order of the Eldest and of the Knitting Circle.

3) The existence of the Kin must be kept secret from all who are not Kinswomen.

4) It was forbidden to claim to be Aes Sedai, or to do anything that, under any circumstances, would cause someone to believe that one was Aes Sedai.

5) It was forbidden to attempt to learn more of the One Power, or to try to increase one’s strength, skills and abilities beyond the level they were upon leaving the White Tower.

6) It was forbidden to use the One Power outside of carefully defined circumstances, or at great need. Anyone violating this rule would be brought before a court and receive severe punishment if found guilty.

7) It was forbidden for anyone except the Knitting Circle, or those named by the Knitting circle, to recruit other women put out of the White Tower or who had run away. Nobody could recruit any woman who could channel except those who had once been in the Tower.

THE NEW RULES OF THE KIN (post- Last Battle)

Little changed in way of the rules set for the Kin, however with their autonomy under question and their home now occupied by foreign invaders, the Knitting Circle concluded that some rules must change to ensure their survival :

Rule 3: The existence of the Kin is less secretive, although great efforts are made to protect the secret of the Kin as a safe home for channelers who left the Tower (see Kin/Tower agreement below)

Rule 5: A set of basic Weaves would be taught that could only be used to serve the greater good of the Kin and the people it sought to protect. These Weaves include:

In addition, it is agreed that:

(i) Any current members of the Kin who wish to return to the White Tower to train to become Aes Sedai have 1 year from the date of agreement in which to return to Tar Valon. All who rejoin will face a minimum of 1 year as an Accepted before being deemed fit to face the trials.

(ii) As was before, those unfit to pass the trials for Aes Sedai (whether deemed or refused) will be sent to the Kin. Only the Knitting Circle and the Hall (including MoN and MoA) will be aware of the transparency on the matter, with both parties agreeing that the success of this arrangement depends largely on those leaving the Tower feeling that the Tower is now unaware of their movements. After 10 years with the Kin, they will be offered a one time opportunity to return to the Tower once more.

(iii) There will be communication points between both parties. Marijdah Sedai of the Red Ajah is appointed as communicator for the White Tower. Tesiava Rhode is initially appointed for the Kin, however as the Kin spread across the continent, a point of contact is established for each branch.

(iv) In an agreement that causes great division in the Hall of the White Tower, Aes Sedai are granted the opportunity for retirement, in which they can be released of the 3 Oaths and retire into the Kin. Many Sitters only supported this agreement as a manner of formality to show solidarity between the parties, neither party expects any Aes Sedai to “demote” themselves to the Kin.

CANON NOTES TO ADHERE TO IN STORYTELLING 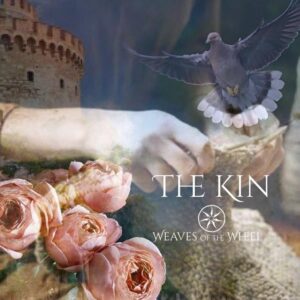 1 ALB – The Kin officially elect Alise Tenijile as the new eldest to lead The Knitting Circle.

1 ALB – Some of the medically inclined members of the Kin, lead by Sumeko Karistovan, agree to work with Aes Sedai of the Yellow Ajah, on a project to develop upon the healing grounds of the city of Etire in Mayene, where the wounded were taken for healing during the Last Battle. A large structure within the city is identified to become the foundation for the first large scale public hospital in the Westlands, although it is several years before this structure will fully open. Around 30% of the Kin relocate to Etire over the next 5 years to work in the hospital as medics and educators in the field of healing.

1ALB – A new Kin farm is established in Andor, 3 leagues from the village surrounding  The Black Tower. The farm becomes home to a major infirmary in Andor, serving Caemlyn and its surrounding areas. It will later serve as the foundations for the Great Hospital of Caemlyn.

4 ALB – With a small base now established on a farm in Andor, many of the older Kin members make plans to return to Ebou Dar, which is deep in Seanchan territory. For many, it’s a simple desire to return home, but the Knitting Circle agree that those in Ebou Dar will be able to provide a safe haven to channelers in Seanchan territory who wish to avoid collaring. Off the record, the White Tower support the Kin’s return to Ebou Dar, using the eyes and ears networks to find suitable locations for them to set up. The hope is that the Kin will help channelers who wish to escape from Altara, find their way to the safety of the White Tower.

6 ALB – After great planning, and a number of Kin bases established, around 90 members of the Kin return to the Ebou Dar. The majority of those are older members, however they are joined by a small band of younger members seeking adventure and purpose. They are split across several “safe houses” so as to not draw attention to their numbers. Having been taught how to Link by the Aes Sedai, weaker channelers are housed with stronger channelers. A defensive strategy, should  they face capture.

11 ALB – The Kin in Andor have formed a good relationship with the Black Tower. Some of the male channelers travel undercover to Ebou Dar, in search for rogue male channelers in Seanchan territories. The Kin offer them shelter across the safe houses. Over the next few years, relationships would form (bonding) and the younger women of the Kin would find a new purpose, working with the Asha’man, finding channelers before the Seanchan and helping them across the borders.

15 ALB – The Great Hospital of Caemlyn is founded. A monumental feat of Aes Sedai, Asha’man and Kins women working together fully for the first time.

17 ALB – The Kin establish more safe houses, this time, just outside Abila in Amadicia. The purpose of these safe houses is to provide temporary shelter to channelers before smuggling them across the borders to escape Seanchan territory.

23 ALB – A third public hospital opens – This time, just outside the city of Far Madding. Around 15% of the Kin established in Andor relocate to Far Madding to teach and work at the new hospital, and a new Kin base is established.

25 ALB – The Seanchan pass a law stating that all male channelers captured within their lands will be executed. Some of the Kin (those bonded with/to Asha’man) make it a priority to find male channelers and get them out of Seanchan held lands. (See: The Seanchan and The Black Tower)

32 ALB – The Kin establish more safe houses, this time in Elmora, Tarabon. The purpose of these safe houses is to provide temporary shelter to channelers before smuggling them across the borders to escape Seanchan territory.

45 ALB – Many of the Kin feel they should separate themselves from the “militant Asha’man”. They do not believe they should involve themselves in their “crusades”. The Kin feel they should focus on their own survival, and only help channelers who seek their help. Many of the younger members of the Kin disagree and bring into question the purpose of the Kin. For a time, this causes division in the Kin.  The younger members break away setting up a new faction, known as the Underground, referring to the Kin as “cowards” (See: The Black Tower)

94 ALB – A large number of Kin (both Kin and Underground) and Black Tower channelers are captured by Seanchan in Altara, after a betrayal by a “freed Damane” seeking favour among the Blood for her Sul’dam. The Damane had sought aid from the Kin and was able to expose a safe house in Altara and several smuggling routes. Some of the stronger female channelers among the Kin are collared, however the weaker ones are scheduled for execution along with the males (To make a statement but also due to a limited number of Sul’dam, see The White Tower). The Black Tower lead a coup into the land and free the channelers before execution. These actions ultimately lead to break down in negotiations to renew the Peace Treaty. (See: The Black Tower and The Seanchan)

97 ALB – The Kin scatter from Seanchan held lands once again. Around 15% of the Kin stay behind through stubbornness, spread in small groups across the remaining safe houses in Altara. Many of the houses in Amadicia and Tarabon are abandoned.

100 ALB – Dragon’s Peace agreement ends and the Seanchan declare war in the Westlands. (See: The Seanchan)

110 ALB – With war in the Westlands, the Kin congregate at the Hospitals, with several now open in the major cities; Caemlyn, Cairhien, Chachin, Etire, Falme, Far Madding, Jehannah, Maradon and Tar Valon. Many would stay at these locations permanently.

144 ALB – New Dragon’s Peace agreement signed. With the new agreement, The Kin are somewhat safer in Seanchan held lands, but many choose not to return to the lands due to the damage caused during the war.

149 ALB – In an attempt to improve relations between the White Tower and the Kin, Communicator Marid’jah Sedai becomes the first Aes Sedai to retire into the Kin. She continues to act as a communicator between both parties, and takes up residence in Far Madding Hospital where she dedicates her time to teaching healing weaves.