July 19, 2021 by weavesofthewheel No Comments 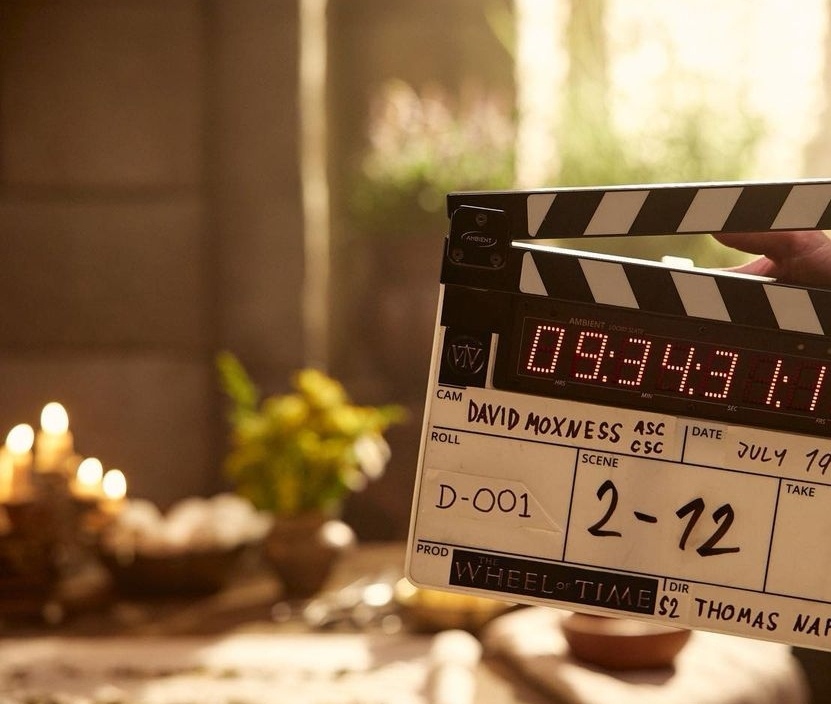 The social media accounts for The Wheel of Time have confirmed that filming for its second season has begun in a short post:

The post captioned ” And the wheel keeps weaving… Filming for Season 2 of our series kicks off today! #TheWheelofTime” shares a clapperboard on a blurred set that gives us a few insights into the details of season 2.

Little more is known at this time, but we teamed up with Amber at Road to Tar Valon Podcast to pick out some of the key details from this announcement.

A clapperboard typically comes with spaces to write the production title, director, camera operator, date, and whether it is a day or night shot. The numbers on a clapperboard consist of the numbers designating the roll (or tape, and for DSLR shooters, memory card), the scene, and the take. As such, the clapperboard in this image can tell us a few details about current filming

Thomas Napper is confirmed as a director for season 2

Thomas is a British Director, who in 2018 was nominated for a BAFTA Award for outstanding debut by a British Writer, for the movie Jawbone.

Thomas has also served as a 2nd unit director for a number of live action Disney movies, including Beauty and the Beast, Aladdin, Pan and Mary Poppins Returns.

It’s also interesting to note, he has worked with both Rosamund Pike on Pride and Prejudice, and Amer Patel on Aladdin.

The roll number indicates the roll of film you are shooting on. If it’s day one, filming has just begun and you have only one camera, your roll number would be A-001. This is labelled D -001 suggesting that it is one of at least 4 cameras on the set.

Here we get our first (albeit blurred) look at season 2 of The Wheel of Time. Many have spotted what appears to be a pestle and mortar upon a table of herbs, and have speculated that this may be a scene that features our favourite Wisdom, Nynaeve al’Meara. Some have even suggested that this is a scene in Tar Valon, perhaps even in the Yellow Ajah Quarters.

However, we couldn’t help but notice the striking similarity in details to these leaked set photos from season 1, believed to be of a set in the Two Rivers.

Details in wall panels, lighting, and foliage in the windows bear striking resemblance, which left us wondering, would the Two Rivers feature again in season 2?

It seems likely that we may pay a visit to Emonds Field once more, especially if the show wants us to form a connection to the people of the Two Rivers before Perrin’s return.

We shall be eagerly waiting to find out.

Want to join the community? Find out more here

December 13, 2021
« Previous post
BRANDON SANDERSON TALKS CHANGES TO SEASON ONE OF THE WHEEL OF TIME
Next post »
RAFE JUDKINS CONFIRMS WHEEL OF TIME TRAILER WILL ARRIVE BEFORE SUMMER’S END