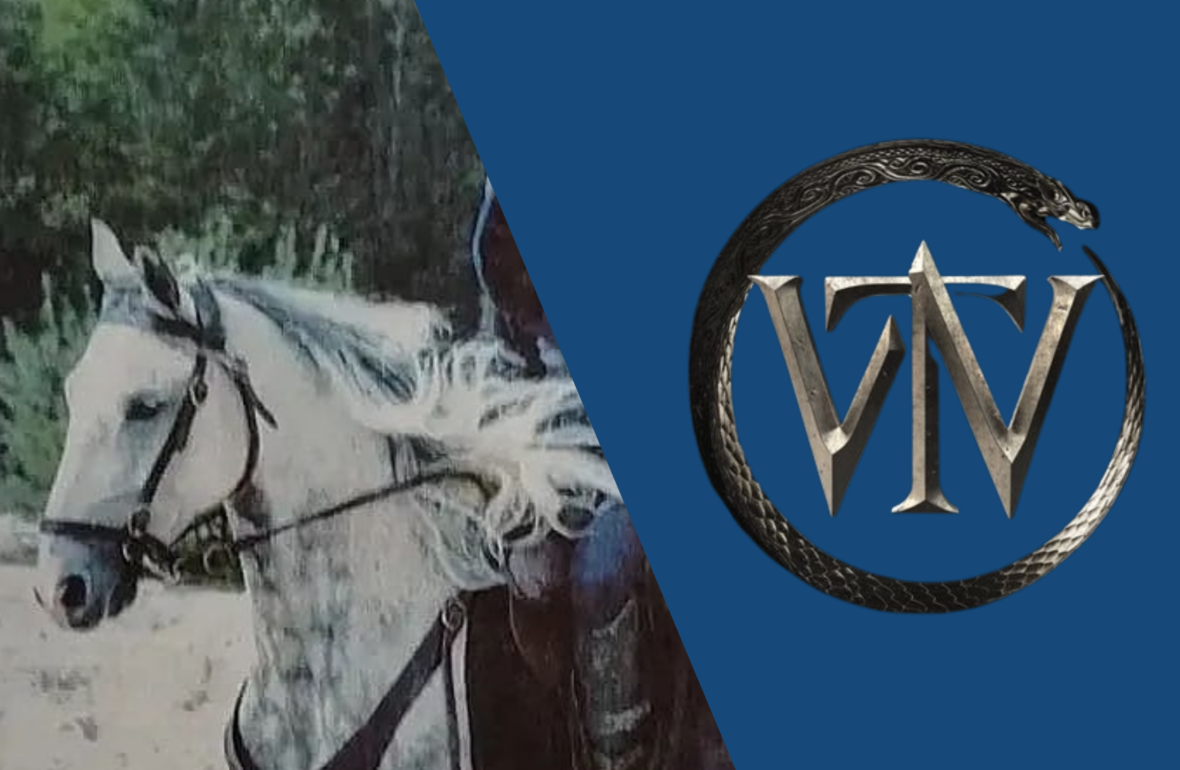 Today (Aug 25) we get our first look at Rosamund Pike’s Moiraine Damodred upon her mare, Aldieb.

These images have come to us courtesy of TV GUIDE (US) Date August 30th – September 12th (2021). Blogger, Jim Meeker on Instagram saw these in his magazine and promptly alerted the WoT fandom.

The most powerful woman in the world

There is only one picture, of Moiraine riding her white horse, Aldieb at a gallop. Moiraine is in all blue and has a look of concentration on her face. In the top left of the image there is a title SCI-FI and below it at the bottom of the page a red octagon with the word ‘Editors’ choice’ in there with a thumbs up.

We then have a caption in white text in the top right that reads:

“The Aes Sedai (such as Pike’s Moiraine) are ‘the most powerful people in the world.’ Judkins says.

There is not much to the image that gives away any indication of the scenes we may be looking it. In fact, it may be little more than a promotional shoot.

Rosamund is galloping on a white horse on a sandy, gravelling field and with non descript greenery and trees making up the backdrop.

Pike is seen in the same blue outfit shown in the Entertainment Weekly First Look while Aldieb is a white and grey mare.

Game of Thrones fans prepare to trade GoT for WoT as The Wheel of Time – late offer Robert Jordan’s 14-book fantasy epic – hits the screen. If you haven’t read even the first title, 1990s the Eye of the World, here are the basics if you’re a fan, learn more about the adaptation.

It appears Amazon is upping their marketing and we can probably expect a few more magazine images coming up in the run in to the trailer. We still have no official trailer release date but Rafe did say the end of summer, and time is ticking.

Until then, the GoT and WoT comparisons will continue, until The Wheel of Time has captured a loyal TV audience. By the end of the planned 8 episodes, we hope WoT fans will be in every country.

Amazon continues to conceal the identity of the Dragon Reborn, hinting that Josha, Marcus and Barney could all possibly be the prophesised saviour. While it becomes very apparent early on as to whom this burden lands on, in the TV series. the mystery will help embrace the world Robert Jordan created and better translate from page to screen.

It is also heartning to hear that the Trollocs will be terrifying! This is something that will look so good on our screens. And we will get to see and hopefully hear Narg!

And lastly, on to our favourite Horse, Bela: Rands horse not Egwene’s horse, as many fans were quick to point out. Has the fact that Bela spends more time with Egwene throughout the story forced the writers to make a little change to the story of our beloved horse?

We shall have to wait and find out!

December 13, 2021
« Previous post
Road to Tar Valon: A Wheel of Time Podcast
Next post »
WELCOME MILOS KONIGSMARK TO THE WHEEL OF TIME FAMILY