AJAH RINGS TO REPLACE SHAWLS IN THE WHEEL OF TIME TV SHOW? 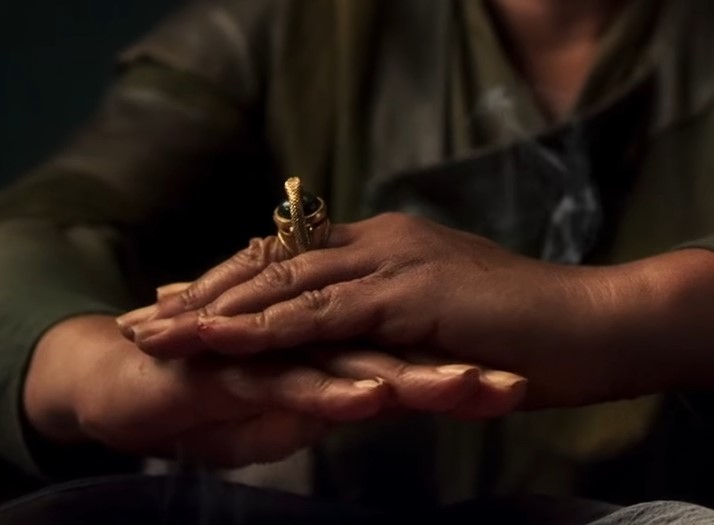 Before the first look and the teaser trailer for Amazon’s highly anticipated “The Wheel of Time” dropped, one of the many questions on every Wheel of Time fan’s mind was – what will the Aes Sedai shawl look like?

Yet there was very little consideration on how the ring may look.

Obviously, it was going to be a slightly new take on the design of the classic ouroboros ring band. But however curious we were, in the back of most people’s minds it was always going to be just another snake biting its tail.

To our surprise, the Aes Sedai ring looks nothing like the thousands of snakes biting their tails we have seen in Etsy shops and the Chinese bulk orders arriving at our thrift markets.

I have always imagined a large clunky snakehead, something that was an effort to just twist and hide in your palm; a ring that would rival the one of King of Malkier on Nynaeves neck cord.

And it appears we are getting just that.

A huge signature piece of jewellery, that on first look makes you think you are looking at 2 rings.

With its big stone and the snake arching up and over it biting its own tail, the ring looks nothing like anything we’ve seen before.

And then there’s the colour of the stone….

The stone seems to be inlaid in a large oval or a circle of gold, and without any doubt has the colour of the Ajah of the wearer.

A large green rock can clearly be seen on Kerene’s hands while healing Moiraine.

Moiraine herself reveals a deep blue rock when she’s taking her hood off. While a red stone sits on an unknown hand in the corner of the screen as we can’t take our eyes of Liandrin.

It is clear that the great serpent ring will not only mark you an Aes Sedai but show off your Ajah too.

Is the ring the new shawl?!

Shawls were rarely worn outside of the White Tower and even in the Tower only on special occasions. They do make for a boring piece of costume if worn too often, and any designer would be glad to be rid of using it daily in such a large production.

It might be that someone will still whip out a shawl on occasion and that the legendary item is not out for good. But from a marketing stand point, shawls may seem impractical to the consumer looking to invest in any merchandise.

So far, we haven’t seen any in the promotional material, although one might argue there are glimpses at some variations.

The Ajah ring could prove a great solution from the Amazon merchandising team as the old ouroboros design has oversaturated the market for decades.

And while the old design might still prove popular by many, it is easy to see how the majority of fans will like to have not only the ring representing their own favoured White Tower group, but also a full collection of all seven.

I know I will.