GQ MAGAZINE SHARES EXCLUSIVE IMAGES FROM THE WHEEL OF TIME

October 19, 2021 by weavesofthewheel No Comments 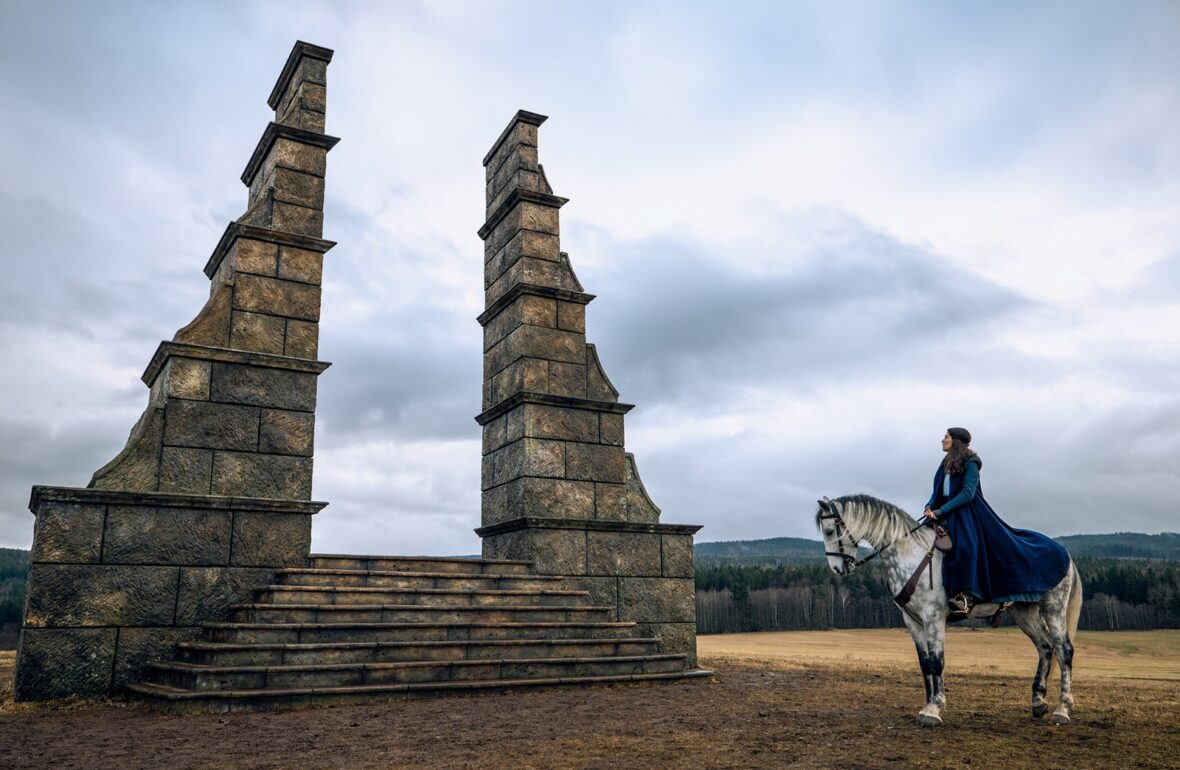 New images from Amazon’s upcoming fantasy “The Wheel of Time” were published today in GQ Magazine.

The article titled “Inside the Wheel of Time“ shares interesting insights into the filming process and development of the series and comes directly off the bat of yesterdays “Behind the scenes” clip shared by the official social media accounts.

The article is an excellent in depth examination into the shows creative process. We picked out a few details that give us clues about the show, due to hit our screens on November 19th.

THE VILLAGE DOES NOT SURVIVE WINTERNIGHT

Every house—interior and exterior—has been charred enough so that it shows on camera.

Unlike the events in the books, where the Trollocs only targeted 3 homes on Winternight, it seems no buildings went unscathed during the screen adaptation.

The Two Rivers, a set built completely from scratch on the outskirts of Prague, was completely destroyed a few days later, according to the article. This leaves no room for a return, at least to the original sets.

Interestingly, this is not the first publication to refer to the village as “The Town of the Two Rivers”. Several others have also used similar terminology, with no mention of Emonds Field. Potentially, this may mean nothing, but it could suggest that the show has opted to use the regions name instead of the village name so as not to confuse the viewers.

The article continues to note, that actor Michael McElhatton who played Roose Bolton on Game of Thrones, sits on a stump in the middle of the wreckage.

A common fan theory among the fandom suggested that unlike in the books, where Moiraine heals Tam of a mortal wound, Tam would not in fact survive Winternight, giving the heroes a tragedy right from the start to build upon.

However, this image from the article shows Tam slumped across Bela, and the written article suggests he is later sat up again.

EVERY TROLLOC HAS HORNS

They’ve all got horns. One of the things we decided early on is, they all have a variety of horn shapes.

There’s a great paragraph about the creation of Trollocs for the show. Nick Dudman, the legendary creature designer of both the Harry Potter and Star Wars franchises, was responsible for building the monsters.

Dudman talks about avoiding making them look like Orcs, while also discussing how to make 20 Trollocs look like 50.

“One of the things we decided early on is, they all have a variety of horn shapes. So if all those horns attach magnetically, and every single horn can swap with another horn on a different head, and they can also have two or three ways of putting them on, then you actually end up with 30 different silhouettes of creature for no extra money.”

This is interesting, as not all Trollocs in the series have horns, however the most notable one, Narg does. This could potentially mean that we won’t see any bird like beaked Trollocs, however, it’s hard to imagine them looking scary on screen.

If you have the time, take a moment to read the full GQ Wheel of Time article. It is full of excellent tid-bits about the show, cast and production. Click here to read