THE WHEEL OF TIME BEHIND THE SCENES 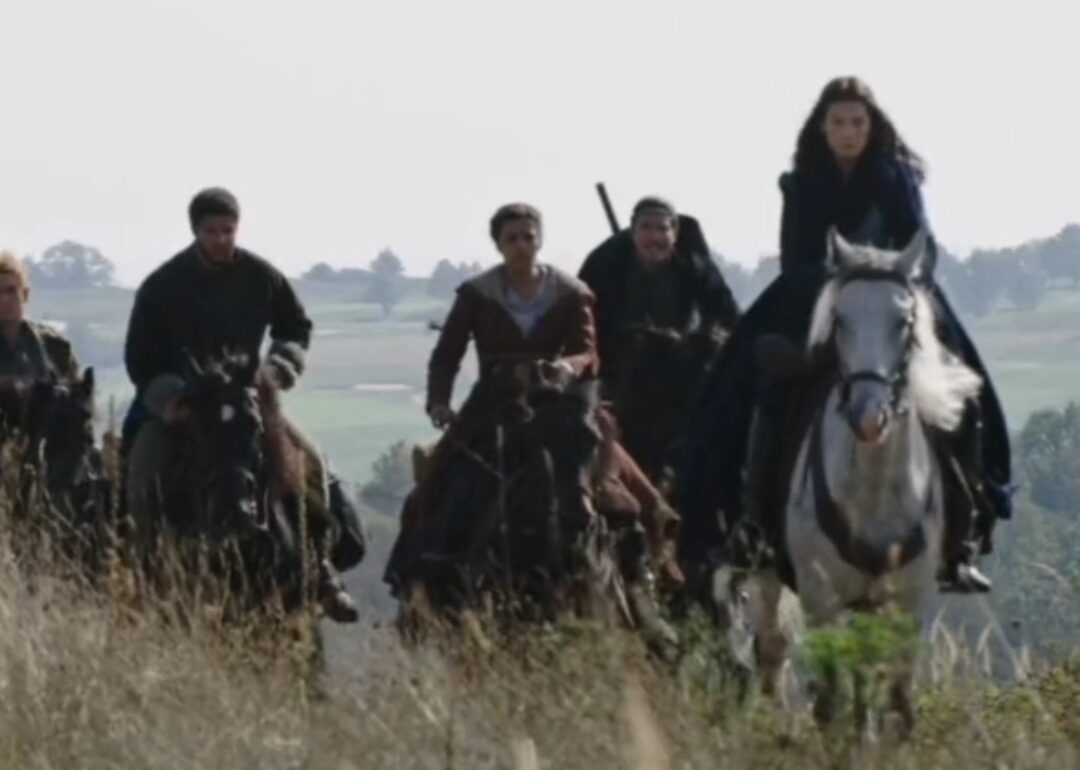 Amazon’s The Wheel of Time is teasing us with more goodies, this time with some behind the scenes footage from the show set to hit our screens on November 19th.

Here’s our shot by shot breakdown with all the “blink and you’ll miss it” moments from todays teaser.

By now, we’ve all seen the Amazon shows unique take on a Waygate, the entrance to “The Ways” which the group must travel in their journey to find the Eye of the World.

The Waygate is a feature piece in the first poster for the series, originally released during San Diego Comic Con back in July. Here we can see the massive structure upon a field of snow and showcasing the attention to detail the production has put into building these sets, opting against over-use of green screens.

THE RIDE TO TARWIN’S GAP

In the next scene, we can make out men upon horses carrying the hawk banner of Shienar. These scenes have before in previous leaks. The men upon horses appear to wear top knots, behind them, men on foot carrying shields. This confirms we will see those epic scenes at Tarwin’s Gap in the show.

The next shots are the best we’ve seen from inside the White Tower so far, with Moiraine and Alanna, accompanied by their warders are walking down a pillared corridor. Interestingly, in one shot, we can clearly make out a statue of a bearded man holding a sword.

The corridor appears to be lined with male statues holding weapons. Are we in the warder barracks? Or the Green Ajah quarters?

PERRIN ON THE WATER

Here we have Perrin standing by the water, with his arm around a woman with braided hair. On the water are paper lanterns. The scene appears quite sombre, and the braided woman suggests this scene was filmed in the Two Rivers.

Could this possibly be after the attack on Winternight?

Here’s our first real look at the Children of the Light, and Abdul Salis as Eamon Valda.

The Whitecloaks are dressed in white cassock style garments, which many fans noticed were not adorned with the sunburst upon the chest.

However, they carry the sunburst banners, in the same style of those carried by the soldiers of Shienar. Rumour has it, there are some Questioners in this shot.

THE DRAGON IN TAR VALON?

Is Rand in Tar Valon? The scenery would suggest so.

MOIRAINE WEAVES AS SHE WILLS

The scene then cuts to a person being thrown by the One Power inside the cave we first saw Logain in the teaser trailer.

A birds eye shot of the village of Emonds Field looking a bit worse for wear. If you cast your eye to the left, can we see the Winespring Inn damage?

A JOURNEY THROUGH THE WAYS

The party at the Waygate, but is this the start of their journey into the Ways?

A still from the trailer, but a better look at that skull mask worn by the shadowspawns horse.

A woman stands in a wooded area with her arms in the air, then a large explosion occurs behind her. Is this Alanna channeling?

2 horses at full gallop ride through a wooded area. We can see Lan upon Mandarb at the front, but who trails behind?

Is this channeling, or martial arts? We couldn’t decide.

Stepin, tailed by Nynaeve, runs with his axes in hand through a wooded area. This looks to be part of the same scene where we can see Alanna? channeling

A door bursts open before a man standing in a room. Look closely at the top of the doors and you can make out some white weaves along the top.

OUR FIRST LOOK AT THOM MERRILIN…THIS IS NOT A DRILL!

Thom sits with a guitar in his lap, looking like he was interrupted while playing for an audience in a tavern. We still don’t have any sight of a gleemans cloak, but this is the first time we’ve seen Alexandre Willuame as Thom, and no doubt the show is saving the patchwork cloak for the show, or full trailer.

Rand and Egwene embrace, in what is likely from the same shots as that image we got 2 weeks ago.

Arguably the best shot of the clip is this moment Zoe Robins as Nynaeve pulls and flips her ginormous braid while staring down a camera….in true Nynaeve fashion!

With its lanterns lit, tables laid and people gathering, here we can see the Winespring before the trollocs invade the village.

NOT AN ACCEPTED TEST

This shot of Egwene in a pool is something we all analysed when we first saw it in the trailer, and we thought it was an Accepted test. But now we have a wider shot, we can see that this is definitely some women’s circle business, and therefore, none of our business!

We can see Nynaeve standing to the right, with other braided women forming a circle around the pool. Also confirming that this is the “ceremony” Rand was referring to during the Winespring Clip from NY Comic Con.

Moiraine rides Aldieb with Egwene and the boys trailing behind her. It is difficult to make out, but it does not appear there are enough horses to suggest Nynaeve is yet with the party.

Nynaeve pushes Egwene off the cliff, in a graceful manor, as seen in the early shots of the teaser trailer. Madeleine Madden is confirmed to have performed her own stunts here.

TAREN FERRY OR THE QUARRY?

Across the water, a small wooden building and mill. Is this Taren Ferry or the Quarry?

EYE OF THE WORLD COVER SHOT

The final shot is of the main party following Moiraine on horse back, in what is very reminiscent of the original cover art for the Eye of the World, wouldn’t you agree?

This behind the scenes footage from The Wheel of Time has given us a great insight into the world the show is developing and it has us thirsty for more. Something tells us, Amazon Prime is gearing up to something big. Tomorrow marks exactly one month until the shows release on November 19th, and with a full trailer still to come, we’re expecting big things from The Wheel of Time production tomorrow.

But of course, we shall have to wait and find out.