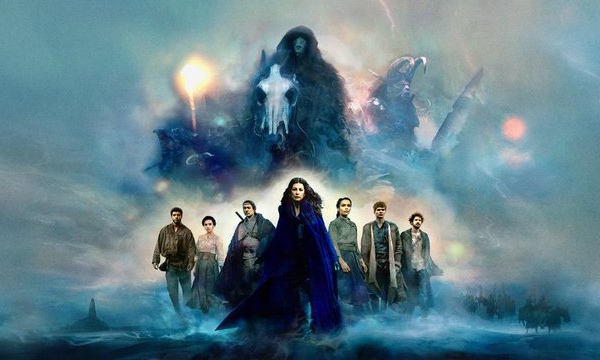 Amazon’s “The Wheel of Time” released its second official poster and three never before seen character images ahead of its main stage appearance at New York Comic Con this week.

The social media team for the show teased the poster release earlier in the day, which features our main heroes centre stage.

The Wheel of Time poster also features the Myrddraal we met in the trailer, accompanied by an entourage of trollocs.

The Wheel of Time on Twitter updated its cover photo with a banner image, teasing even more details… including our clearest shot to date of a trolloc.

On Wednesday, the official social media pages for the show shared 3 unseen images of our heroes. Featuring Rosamund Pike as Moiraine Damodred. Daniel Henney as her Warder Lan Mandragoran. and Josha Stradowski and Madeleine Madden as Rand and Egwene.

An exchange between The WoT and AmazonPrimeVideo on Instagram seemingly confirmed the horse on the left as Bela. While eagle-eyed fans were quick to spot that Lan’s sword has some old tongue scripture engraved upon the blade.

The main cast will take the stage at New York Comic Con tomorrow (Fri 8th Oct) at 11.30 PT. During which, The Wheel of Time promises an exclusive look at it shows, set for release Nov 19th.

Will we see trailer 2 tomorrow? We can’t wait to find out! Come and chat with fans of the series now.

LEARN MORE ABOUT JOINING WEAVES OF THE WHEEL COMMUNITY HERE