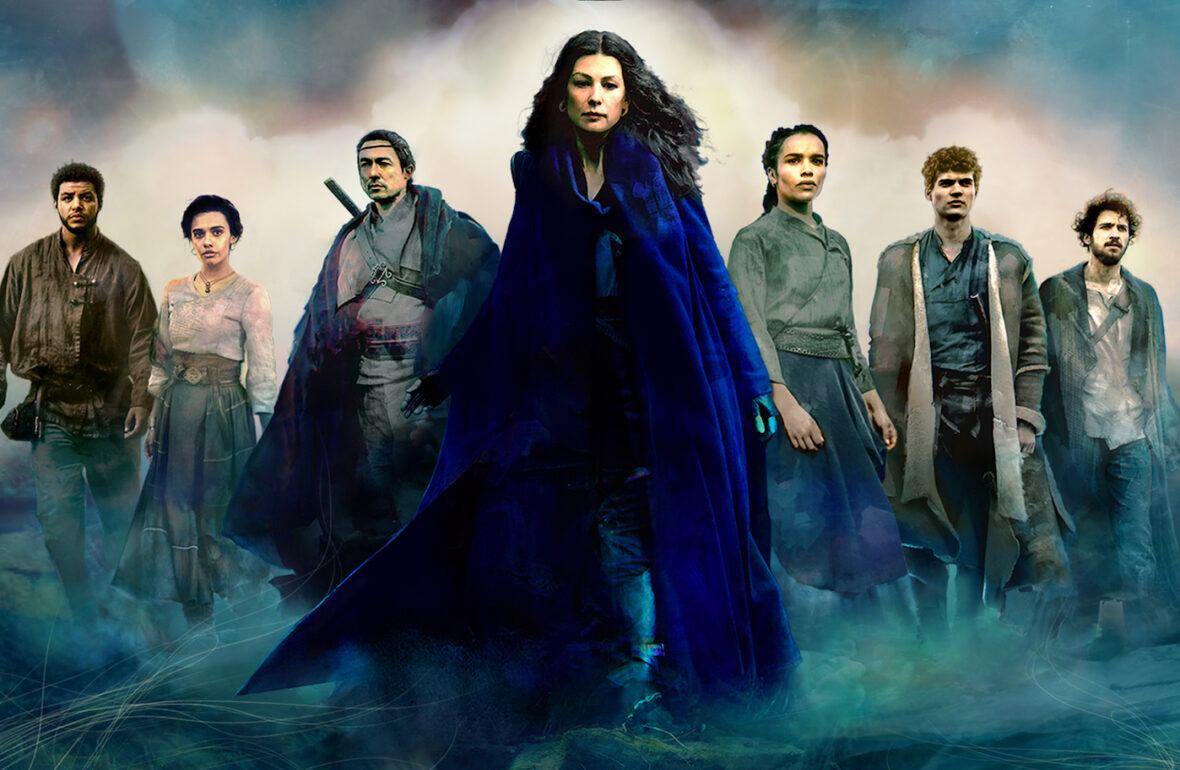 The Wheel of Time Soundtrack: The First Turn by Lorne Balfe was released this week, just in time for the release of the first episodes on November 19.   We reacted to a couple of the songs, “Al’Naito,” “Caisen’shar,” and “Mashiara” on Water and Shade, but the new songs are waiting eagerly for me to listen.

So here is my reaction in literary form, as I enjoy the songs for the first time.

Immediately I get a hit of youth, and not just because of the title.  This music reminds me of the growing pains of realizing you don’t quite fit the mold that was set for you.  It’s hopeful, sweeping, and complex, as most of us are in our adolescence.

The terror strings? This song confuses me, but I can hear Moiraine in this.  You don’t know her yet, you don’t know if she is a friend or foe. The guitar seems foreshadowing to me. I see her moving past a troubled beginning, into her destiny.

Again we hear the folksy old tongue with a driving beat beneath and some sick guitar riffs.  It brings some modern flavor to the music.  I’m already digging the beats, the tambourine and clapping make me want to dance by a fire.

Aes Sedai (Servants of All)

Well we are 100% in the Hall of the Tower here, aren’t we? Echoing, thrumming, horns, this is intimidating as hell.  A stern woman in a superbly structured dress is telling me I’ve been a naughty girl, and I am absolutely ok with that.

Ost Ninto Shostya (On Your Knees)

I NEED TO RUN! I don’t know if I’ve just had a run-in with the Whitecloaks, or if I’m a Red about to Gentle a certain false Dragon, but RUNNING IS THE ONLY OPTION.  And yes, this is going on my “Maiden of the Spear” playlist, which is the only soundtrack for running.

We talked about this on Water and Shade (see the links below for the show), and I was not super into it the first time, but after seeing more of Nynaeve in the early promotional material, this seems to fit her.  But I CANNOT get over how much this sounds like “Take on Me” by A-Ha… just me? Ok.

This was the first song released from the soundtrack, and makes me think of Egwene.  The gentle female voices wrapping around us, building in complexity, unsure at first, then like “Yes, I’ve got this.”  This song got a lot of flack at first, but I am in love with it.

You can’t imagine how excited I was to see this on the track list.  Deep bass and overlying guitar, slowly building to a rocking beat.  It’s one of the more “soundtrack” songs on this playlist.  And yes, it’s going on the running playlist.

I had this on my playlist since we reacted to it on Water and Shade, and listening to this song as I topped a hill during a hike was absolutely one of the coolest experiences.  If there was an audible representation of that scene in the trailer with the dancing folks in a circle… this is it.

This is the music I’d put on that visual of Egwene coming out of the water with the paint on her… we are learning about Saidin and Saidar I’m sure, and it makes me want to let go and touch the Source.

Oh this is creepy.  This is the anthem for the Whitecloaks, I’m guessing.  But it is everything awful and creepy about zealotry, even if it’s not a Whitecloak theme.  This feels too dark but it’s delicious.

This song is so Lan.  It’s quiet and slow, with interest beneath the surface.  It’s comforting, but sad, like when you hug your partner after a really long day.  That’s basically what a Warder is, and it makes me want to go hug mine.

It’s creepy, but not in the same way as Al’Dival was.  This is Trolloc music, the weird grinding voices beneath are coming closer, and whatever ASMR they’ve got going on beneath the surface with those voices makes the hair stand up on the back of my neck, building until the Shadowspawn show up at your door and just destroy everything.  I think he’s nailed the Myrddraal to the door with this one.

The Wheel of Time soundtrack by Lorne Balfe is available on Spotify, Amazon Music, and anywhere you find great jams.  Go check it out and let us know what you think!

Come and join the community – click here to learn more